How are the time scales of an exponential decaying autocorrelation related to the duration of peaks? 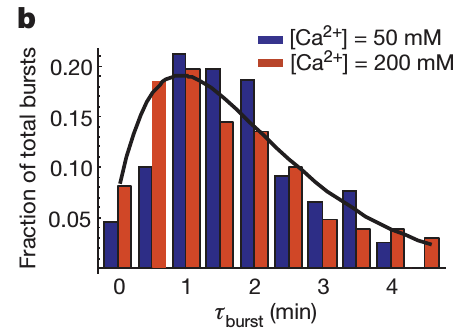 The authors computed the autocorrelation from the traces and then estimated $\tau_{burst}$ and $\tau_{cluster}$. Moreover, they estimated the relative weight of the two types of burst at varying calcium concentrations.

Their method was as follow: (1) they calculated the mean autocorrelation function (for every calcium concentration); (2) they described the curve with an exponential decay function; (3) they estimated the weight of the two types of bursts.

As an example, below are shown two mean autocorrelation functions: one of the tracks obtained at 50mM calcium concentration (blue), the other at 200mM (red). 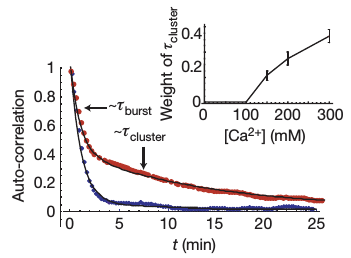 In the supplemental document (here) they say:

The autocorrelation function was computed from the thresholded traces and provided an unbiased estimate of the size of the isolated bursts and clusters, which correspond to the two time scale of the exponential decay in the fit.

My question is: how are the time scales of the exponential decay of the autocorrelations related to the duration of bursts and their relative frequencies?

Browse other questions tagged frequency autocorrelation or ask your own question.