What is a robust way to fit piecewise linear but noisy data?

I'm measuring a signal, which consists of several almost linear segments. I'd like to atomatically fit several lines to the data to detect the transitions.

The dataset consists of a few thousand points, with 1-10 segments and I know the number of segments.

This is an example of what I'd like to do automatically. 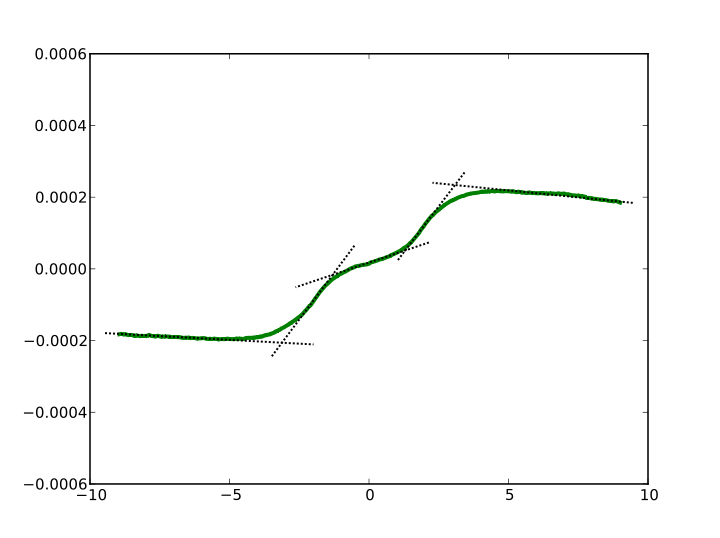 I tried two approaches, naively (using only 3 segments). Surely there would be fancier methods out there.

RANSAC, supposed to be a robust fitting mechanism. It's easy to stop the algorithm after a number of segments. However it may be difficult to enforce continuity between segments--as seems required in your application-- at least with a simple implementation. As a proof of concept, I created an image from the data points so that I could use the RANSAC engine available in $ImageLines$, the line detection function of Mathematica. 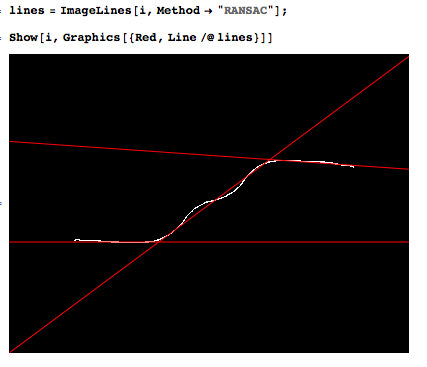 Fit a piecewise linear model using a general purpose minimizer. It's easy to enforce segments continuity. Interestingly, testing for residuals and other properties may provide enough information to determine automatically the number of segments--I've not tried it though. That's how it looks in Mathematica: 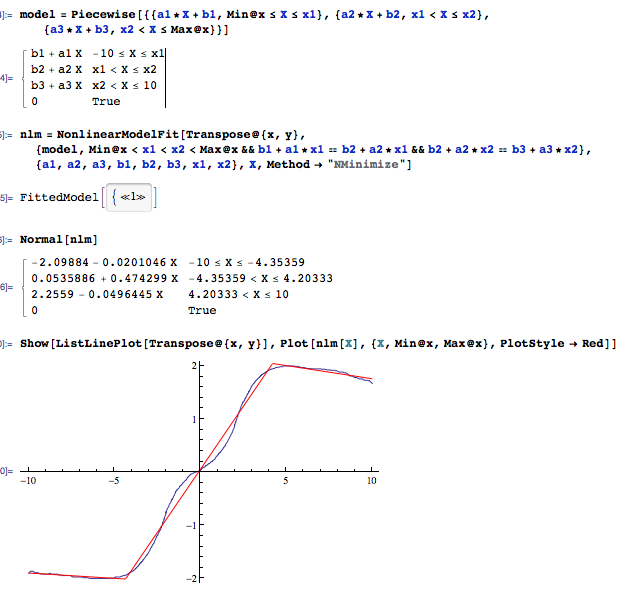 I don't claim the following method is robust, but it might work for you. With thousands of points $x[n]$ and perhaps ten or so straight-line segments, proceed as follows.

(Years later) piecewise-linear functions are splines of degree 1, which most spline fitters can be told to do. scipy.interpolate.UnivariateSpline for example can be run with k=1 and a smoothing parameter s, which you'll have to play with -- see scipy-interpolation-with-univariate-splines .
In Matlab, see how-to-choose-knots .

Added: finding optimal knots is not easy, because there can be many local optima. Instead, you give UnivariateSpline a target s, sum of error^2, and let it determine the number of knots. After fitting, get_residual() will get the actual sum of error^2, and get_knots() the knots. A small change in s may change the knots a lot, especially in high noise -- ymmv.
The plot shows fits to a random piecewise-linear function + noise for various s.

For fitting piecewise constants, see Step detection. Can that be used for pw linear ? Don't know; starting off by differentiating noisy data will increase the noise, wrong.

Other testfunctions, and/or links to papers or code, would be welcome. A couple of links:
piecewise-linear-regression-with-knots-as-parameters
$\qquad$ Linear splines are very sensitive to where the knots are placed
knot-selection-for-cubic-regression-splines
$\qquad$ This is a tricky problem and most people just select the knots by trial and error.
$\qquad$ One approach which is growing in popularity is to use penalized regression splines instead.

Added March 2014: Dynamic programming is a general method for problems with nested subproblems like this: 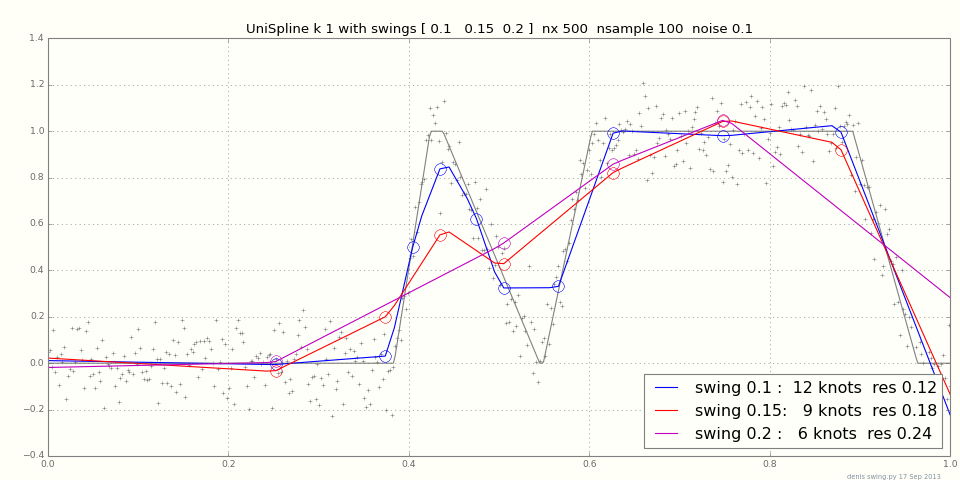 Take the derivative and look for areas of nearly constant value. You would need to create the algorithm to search for those areas with ideally some level of +/- slope and that would give you the slope of the line for that section. You might want to perform some smoothing, like a sliding mean, prior to doing the sectional classification. The next step would be to get the y-intersection, which should be trivial at that point.

Using an l1 trend filter is another idea:

Not the answer you're looking for? Browse other questions tagged algorithms or ask your own question.

27
Calculating the PDF of a waveform from its samples
8
Detecting a fixed template image out of a semi-constant frame of video
12
High quality reverb algorithm
5
Simple beat detection algorithm for microcontroller
5
How to detect specific behavior in time series?
6
PID With Prediction
1
Pose estimation of colored checkerboard cubes
5
Algorithm for detecting the time where the signal is above a threshold