I am happy to accept suggestions either in R or Matlab, but the code I present below is R-only.

The audio file attached below is a short piece of conversation between two people. My goal is to distort their speech so that the emotional content will becomes unrecognisable. The difficulty is that I need some parametric space for this distortion lets say from 1 to 5, where 1 is 'highly recognisable emotion' and 5 is 'non-recognisable emotion'. There are three ways I thought I can use to achieve that with R.

The first approach was to decrease the overall intelligibility by introducing noise. This solution is presented below (thanks to @carl-witthoft for his suggestions). This will decrease both intelligibility and emotional content of the speech, but it's very 'dirty' approach - it's hard to make it right to get the parametric space, because the only aspect you can control there is an amplitude (volume) of noise. 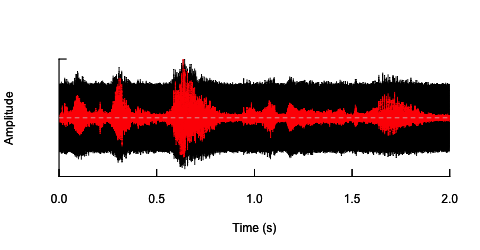 The second approach would be to somehow adjust the noise, to distort the speech only in the specific frequency bands. I thought I could do it by extracting amplitude envelope from the original audio wave, generate noise from this envelope and then re-apply the noise to the audio wave. The code below shows how to do that. It does something different than noise itself, makes the sound cracking, but it goes back to the same point - that I am only able to change the amplitude of noise here. 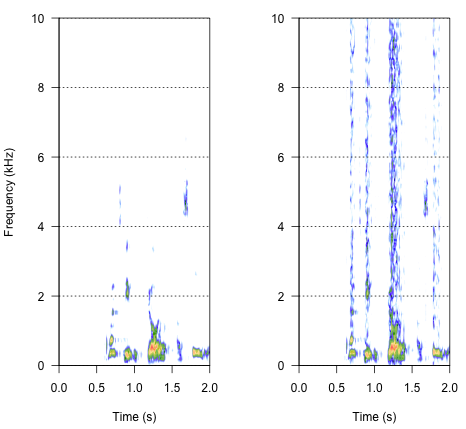 The final approach might be the key to solve this, but it's quite tricky. I found this method in report paper published in Science by Shannon et al. (1996). They used quite tricky pattern of spectral reduction, to achieve something that probably sounds quite robotic. But at the same time, from the description, I assume they might have found the solution that could answer my problem. The important information is in the second paragraph in the text and note number 7 in References and Notes - the whole method is described there. My attempts to replicate it so far have been unsuccessful but below is the code I managed to find, together with my interpretation of how the procedure should be done. I think that almost all the puzzles are there, but I can't somehow get the whole picture yet.

So how should the result sound? It should be something between hoarseness, a noisy cracking, but not so much robotic. It would be good if the dialogue would remain to some extend intelligible. I know - it's all a bit subjective, but don't worry about that - wild suggestions and loose interpretations are very welcome.

I read your original question and wasn't quite sure what you were getting at but it's quite a lot clearer now. The problem you have is that the brain is extremely good at picking out speech and emotion even when the background noise is very high which is your existing attempts have only been of limited success.

I think the key to getting what you want is to understand the mechanisms that convey the emotional content as they are mostly separate from those that convey the intelligibility. I've got a some experience around this (in fact my degree dissertation was on a similar subject) so I'll try and offer some ideas.

Consider your two samples as examples of very emotional speech, then consider what would be an "emotionless" example. The best I can think of right now is the computer generated "Stephen Hawking" type voice. So, if I understand right what you want to do is understand the differences between them and figure out how to distort your samples to gradually become like a computer generated emotionless voice.

I'd say that the two main mechanisms to get what you want are via pitch and time distortion as a lot of the emotional content is contained in the intonation and rhythm of the speech. So, a suggestion of a couple of things that might be worth trying :

Now, if you decided to approach either of these methods then I'll be honest - they're not that straightforward to implement in DSP and it's not going to be just a few lines of code. You're going to need to do some work to understand the signal processing. If you know somebody with Pro-Tools/Logic/Cubase and a copy of Antares Autotune then it'd probably be worth trying to see if it'll have the effect you want before trying to code something similar yourself.

I hope that gives you some ideas and helps a little. If you need me to explain any of the things I've said any more then let me know.

I suggest you get some music production software and play with that to get the effect that you want. Only then should you worry about programmatically solving this. (If your music software can be called from a command line, then you can call it from R or MATLAB).

One other possibility that hasn't been discussed is to completely strip out the emotion by using speech to text software to create a string, then text to speech software to turn that string into a robot voice. See https://stackoverflow.com/questions/491578/how-do-i-convert-speech-to-text and https://stackoverflow.com/questions/637616/open-source-text-to-speech-library.

To get this working reliably you will probably have to train the first piece of software to recognise the speaker.

Not the answer you're looking for? Browse other questions tagged matlab audio noise or ask your own question.