Why are magnitudes normalised during synthesis (IDFT), not analysis (DFT)?

In most examples and FFT code that I've seen, the output (frequency magnitudes) of the forward DFT operation is scaled by N -- i.e. instead of giving you the magnitude of each frequency bin, it gives you N times the magnitude.

Operationally, this is simply because the DFT is calculated by taking the inner product of the signal with each basis sine (i.e. un-normalised correlation). However, that doesn't answer the philosophical question of why don't we just divide by N before returning the output?

Instead, most algorithms divide by N when re-synthesising.

This seems counter-intuitive to me, and (unless I'm missing something) it makes all explanations of the DFT very confusing.

Whether you scale the output of your DFT, forward or inverse, has nothing to do with convention or what is mathematically convenient. It has everything to do with the input to the DFT. Allow me to show some examples where scaling is either required or not required for both the forward and inverse transform.

Must scale a forward transform by 1/N.

To start with, it ought to be clear that to analyze a simple sine wave, the length of the transform should be irrelevant, mathematically speaking. Suppose N=1024, Freq=100 and your signal is:

If you double the length of the DFT, N=2048, the output values would be twice those of the 1024 point DFT, which again, makes the results meaningless unless we scale by 1/N. The length of the DFT should not be a factor in these sorts of analysis. So in this example, you must scale scale the DFT by 1/N.

Must not scale a forward transform.

Now suppose you have the impulse response of a 32 tap FIR filter and want to know its frequency response. For convenience, we will assume a low pass filter with a gain of 1. We know that for this filter, the DC component of the DFT must be 1. And it should be clear that this will be the case no matter the size of the DFT because the DC component is simply the sum of the input values (i.e. the sum of the FIR coefficients).

Thus, for this input, the DFT is not scaled by 1/N to get a meaningful answer. This is why you can zero pad an impulse response as much as you want without affecting the outcome of the transform.

What is the fundamental difference between these two examples?

The answer is simple. In the first case, we supplied energy for every input sample. In other words, the sine wave was present for all 1024 samples, so we needed to scale the DFT's output by 1/1024.

In the second example, by definition, we only supplied energy for 1 sample (the impulse at n=0). It took 32 samples for the impulse to work its way through the 32 tap filter, but this delay is irrelevant. Since we supplied energy for 1 sample, we scale the DFT's output by 1. If an impulse were defined with 2 units of energy instead of 1, we would scale the output by 1/2.

Must not scale an inverse transform.

Now let's consider an inverse DFT. As with the forward DFT, we must consider the number of samples we are supplying energy to. Of course, we have to be a bit more careful here because we must fill both the positive and negative frequency bins appropriately. However, if we place an impulse (i.e. a 1) in two appropriate bins, then the resulting output of the inverse DFT will be a cosine wave with an amplitude of 2 no matter how many points we use in the inverse DFT.

Thus, as with the forward DFT, we don't scale the inverse DFT's output if the input is an impulse.

Must scale an inverse transform.

Now consider the case where you know the frequency response of a low pass filter and want to do an inverse DFT to get its impulse response. In this case, since we are supplying energy at all points, we must scale the DFT's output by 1/N to get a meaningful answer. This isn't quite as obvious because the input values will be complex, but if you work through an example, you will see that this is true. If you don't scale by 1/N you will have peak impulse response values on the order of N which can't be the case if the gain is 1.

The four situations I've just detailed are end point examples where it is clear how to scale the DFT's output. However, there is a lot of gray area between the end points. So let’s consider another simple example. 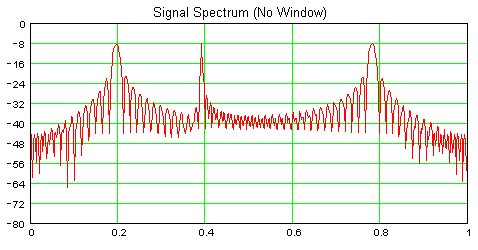 The fact that all three components are supplying the same amount of energy is obvious, which explains the DFT results, but there is an important point to be made here.

Which brings me to my final point; in general, we have no idea how long a particular frequency component is present at the input to our DFT, so we can't possibly do this sort of scaling. In general however, we do supply energy for every sample point, which is why we should scale the forward DFT by 1/N when analyzing a signal.

To complicate matters, we would almost certainly apply a window to this signal to improve the DFT's spectral resolution. Since the first and third frequency components are at the beginning and end of the signal, they get attenuated by 27 dB while the center component gets attenuated by only 4 dB (Hanning window). 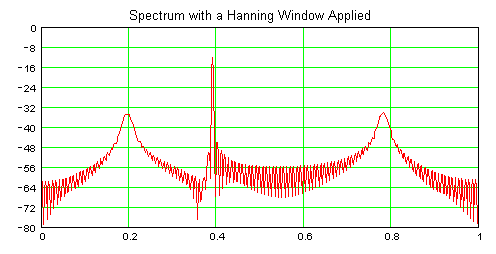 To be clear, the output of the DFT can be a pretty poor representation of the input, scaled or not.

In the case of the inverse DFT, which is usually a pure mathematics problem, as opposed to the analysis of an unknown signal, the input to the DFT is clearly defined, so you know how to scale the output.

When analyzing a signal with a spectrum analyzer, analog or FFT, the problems are similar. You don't know the power of the signal displayed unless you also know its duty cycle. But even then, the windowing, span, sweep rates, filtering, the detector type, and other factors all work to goof the result.

Ultimately, you have to be quite careful when moving between the time and frequency domains. The question you asked regarding scaling is important, so I hope I have made it clear that you must understand the input to the DFT to know how to scale the output. If the input isn't clearly defined, the DFT's output has to be regarded with a great deal of skepticism, whether you scale it or not.

I can think of several reasons involving computational precision issues, but that probably would not do justice because mathematically we're defining it the same way no matter what, and mathematics knows no precision issues.

Here's my take on it. Let's conceptually think about what DFT means in signal processing sense, not just purely as a transform. In this case, it seems to me that applying DFT to a signal and to a system makes us wish to see different results.

For example, let's apply the DFT to a constant signal of value 1. Let's also suppose that this signal is finite in length and is 16 taps long. What do we want from DFT in this case? Obviously, we want it to tell us what amplitude each frequency component of the signal has. Clearly, our signal has a single component of frequency 0 and amplitude 1. But the DFT gives us a single peak at bin 0 and height 16! In this case, your frustration with the definition of the DFT makes perfect sense. We should scale the analysis coefficients, not the synthesis coefficients.

Okay, now let's analyze the same number array, namely our string of 16 ones, but in this case as a system. What do we conceptually want the frequency response of a system to mean? Most people will say that it is the amplitude of the output compared to that of the input, i.e. the transfer function. It this case, suppose that we feed a unity amplitude DC signal into our system and look at the amplitude of the steady-state response. Well, convolve two constant 16-tap signals together and you get a transient ramp followed by a steady state output which is a DC signal of amplitude (check-this-out!) 16! In this case our definition of non-scaling analysis transform makes more sense than otherwise.

At the end of the day, it's all about what you're trying to represent. There are many reasons for considering this system-centric definition of the DFT.

If, however, we look at the transform from a purely mathematical perspective, neither of these make the most sense, since we can make this transform orthonormal and unitary by scaling both analysis and synthesis transformations by $\frac{1}{\sqrt{(N)}}$. This will also preserve power of both time and frequency representation such that the Parseval's theorem always holds.

These 3 scaling variations all allow an IFFT(FFT(x)) round trip, using generic unscaled sin() and cos() trig functions for the twiddle factors, to be an identity transform.

Note that preserving sinusoidal magnitude on the forward FFT does not preserve total energy (as in Parseval's theorem). Pick the one you prefer.

Not the answer you're looking for? Browse other questions tagged fft dft magnitude normalization or ask your own question.

16
Fast Fourier transform- non-integer number of cycles in the FFT aperture
5
Why idft(dft(a) * dft(b)) not equal to convolve(a, b)?
2
DFT and then IDFT does not provide the same signal
1
Power Spectral Density estimate (PSD)
3
What is the physical significance of the Fourier coefficients in the DFT of audio signals and how can they be best displayed in a spectrogram?
4
Analysis frequency of the DFT?
2
How do I calculate peak amplitude of the signal components after zero padding and FFT?
0
Calculating phase of DFT sinewave?
0
Computing Autocorrelation via FFT