How to detect specific behavior in time series?

I was not quite sure what the right SE for this was, so I posted this also here on SciComp. Please tell me which one to remove :)

It is known that during certain (unknown) intervals, the trend in some of the time series is well-approximated by

and $\omega>0$ usually "small", but not really restricted.

An example of what such a function looks like: 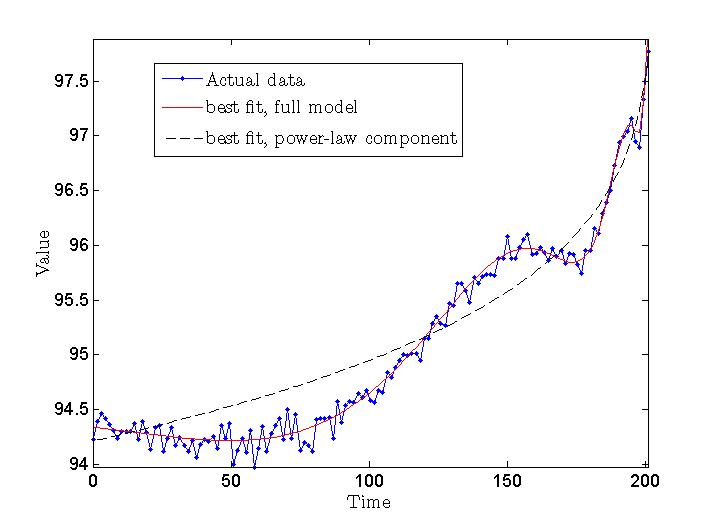 After this interval ($t > t_f$), there is nearly always a rapid decline, after which the signal continues as it did before the interval ($t<t_0$). Of course, each series also has zero-mean, normally distributed noise of varying strength superimposed on it, hence the approximate sign.

My first stab at it

Since each of these time series can be quite long and voluminous, and I have quite many series to analyze (and that number will likely grow over time), visual inspection is out of the question. Moreover: often, it is quite easy to miss this pattern by just looking at the signal.

To detect the power law, I thought of the following procedure:

To detect the oscillating component, I came up with the following:

Then, these two approaches are to be combined:

Why I'm looking for another approach

Well, that all sure sounds very nice, but of course I wouldn't be asking a question here if it all worked as well as it sounds :)

The method I use to detect the presence and parameters of the power law:

I could take the log of the data and detect linearity, but that suffers from the same problem -- the periodic component (as well as the unknown offset $t_f$) seems to make that unreliable.

The method I use to detect the periodic component:

I'm kind of stuck, and I need some new inspiration. Any suggestions?

An approach that might be worthwhile investigating is some sort of on-line method. Because of the highly non-linear nature of your signal model, the standard Kalman filter is out, but an Extended Kalman filter (or, perhaps, a particle filter) might be worth looking at.

The output equation would be where all the nonlinearities are encoded.

The trick will be to see how the (Extended) Kalman filter's error covariance differs between when you have this signal present, and when you don't. The CUSUM algorithm applied to some statistic you will need to define might work. See Basseville and Nikiforov for details of that and other change detection algorithms.

It's not exactly the same thing, but this paper suggests that the approach may be feasible. Their first example has a somewhat nonlinear system: 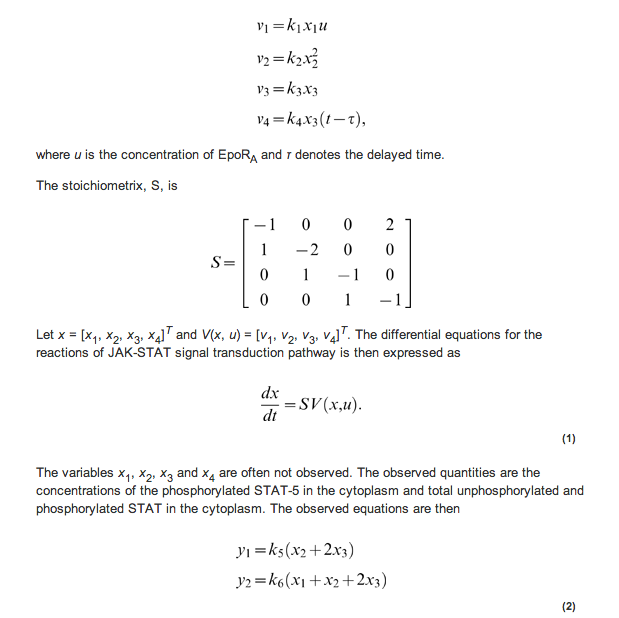 6
How to choose FFT depth for ADC performance analysis (SINAD, ENOB)
13
ADC performance simulation: How to calculate SINAD from FFT?
9
How do I go about detecting whistles, pops and other sounds in live audio input?
5
Algorithm for 1d spline interpolation suitable for 8 bit microcontroler
0
EEG peaks do not get identified at the correct frequencies