This is a photo of our homeworld, taken by the Juno spacecraft recently, sling-shotting on its way to Jupiter. What it gained in speed, we lost in ours, however thankfully we will not be falling into the sun. 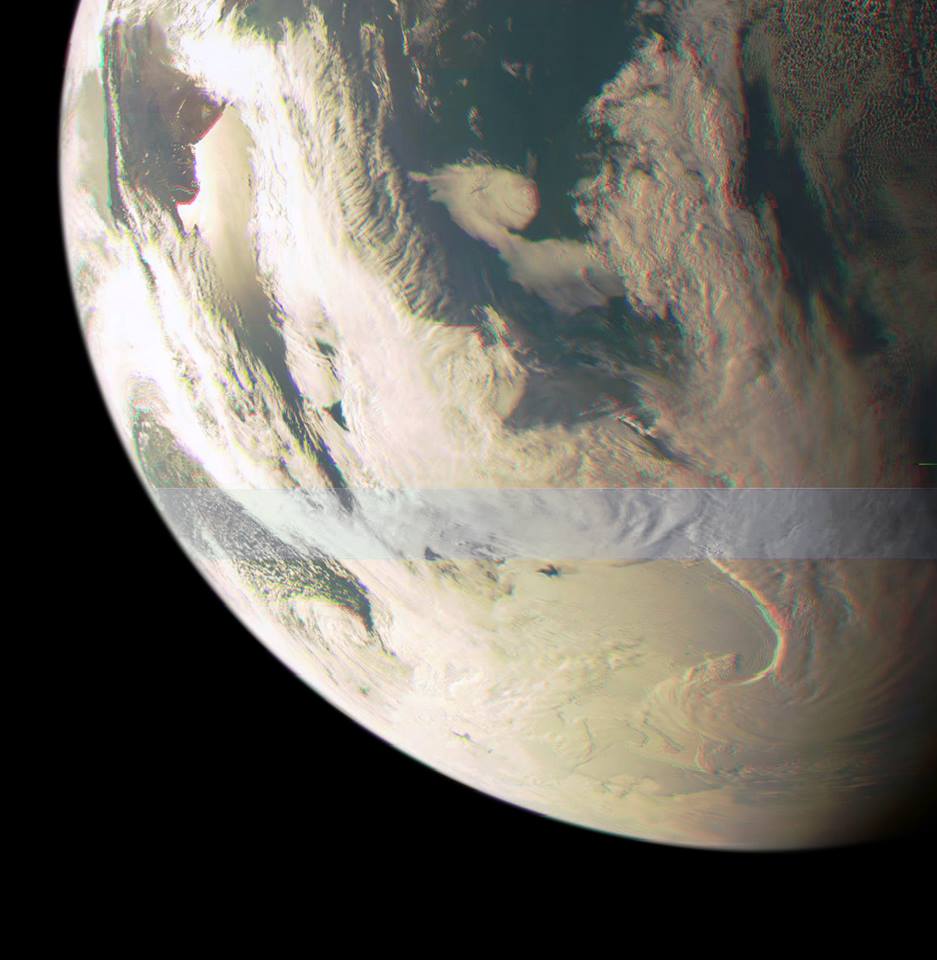 I think the South American continent is on the left.

However, we can notice that there is a sort of artifact across the image, a faint sort of blue bar that exists across the image. I am curious as to what may have caused that.

What I would really like to know though, is what image processing techniques us puny humans might muster in order to remove this artifact?

There is both a hue shift and a saturation shift from the full color image to the band artifact. Converting the color image to grayscale generates an image that still has an artifact, but that is less obtrusive.

There are "image inpainting" algorithms that you might try to correct the artifact, though it would help to first isolate the affected region. Here are a few thoughts on identifying the artifact:

Here are specs for JunoCam: http://en.wikipedia.org/wiki/JunoCam

That sensor should give a nice color image without weird artifacts when used on earth in gentler circumstances.

Although the artifact did not appear to extend into the black region of space at left, that could be a matter of dynamic range/windowing: there may be some difference in the charge on those pixels, but perhaps that difference is clipped to zero.

My guess is that this is a readout problem as the image rows are dumped. With older analog cameras we could see all sorts of crazy artifacts related to EM interference. With digital cameras that's usually much less of a concern, but one possibility is that some short, localized EM event occurred that somehow affected just certain rows.

If you zoom in to the top of the band artifact, you'll see desaturated rainbow artifacts. There are two non-adjacent rows that are brighter than their neighbors, too.

Since the artifact is lined up so nicely with the horizontal rows of the image, I would expect the problem is some internal electronics problem rather than a problem with lensing, color filters, flaring, or anything like that. Unless the camera became damaged by a particularly strong EM event, I would guess that the artifact would occur only rarely.

Not the answer you're looking for? Browse other questions tagged image-processing filters image denoising or ask your own question.