What do triangles mean in frequency aliasing depiction?

How edges of the triangle get on both sides of fs? What is their purpose? Why fs in the center? (from Lyons Understanding DSP) 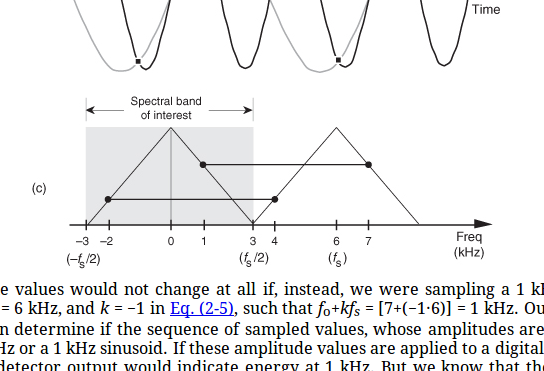 frequency-spectrum sampling
Share
Improve this question
edited May 30 '14 at 23:57

When you sample at 6 kHz the spectral content of the unshaded triangle will appear as the triangle in the shaded region. More specifically the frequency at 4 kHz will appear at -2kHz, and the frequency at 7 kHz will appear at 1 kHz. Another way of saying this is, if you sample at 7kHz tone at 6 kHz it looks exactly the same as a 1 kHz tone sampled at 6 kHz. That's why aliasing leads to ambiguity - you can't tell whether that 1 kHz tone actually came from a 1 kHz, or a 7 kHz tone.

So the unshaded triangle represents where the original spectral content is, and the triangle in the shaded portion is where that triangle gets mapped to (when sampling at 6 kHz).

If you want to sample a signal you (mathematically speaking) Convolve it with a train of impulses (having as frequency the sampling frequency) resulting in the frequency domain in multiple copies your signal's (the one you have sampled) frequency representation.That copied are depicted in the picture you are showing there and are situated lets say "above" each impulse (from the train of impulses you used to sample your signal) thats why you see the compounents spaced at fs.Now if you increase your sampling rate you will observe that this multiple copies will be shrink in and if you decrease it the will grow like spread more around the fs.That means that after a certain point of reducing the sampling rate (samsapling,if a spell it correctly) these will overlap resulting in alliasing.

My take is the shaded area contains the original signal. when you sample that baseband band-limited signal at fs you will get replicas of it at intervals spaced by nFs n=-inf......inf. as long as the sampling rate is greater than in this case the double-sided bandwith there will be no ailiasing/distortion of the signal if you low pass filter it. You could also recover the original signal by bandpass filtering at nFs and shifting the signal back down to basband

As a short first answer: The triangles indicate the extent of the frequency content of the signal ($\rightarrow$ bandwidth). Aliasing results if the triangles overlap.

The triangle centeted at 0 and spreads from $-f_m$ to $+f_m$ shows the frequency spectrum of the signal. The spectrum says that the signal has frequency components ranging from 0 to $f_mHz$ or the signal is band-limitted. Nothing special about triangle you can use any band limited shape. A few books uses inverted parabola instead of triangle.

On sampling the above signal, its spectrum changes. Using fourier analysis it can be proved that the new spectrum can be obtained by adding the shifted versions of the original spectrum by integer multiples of $f_s$. Where $f_s$ is the sampling frequency.' That is why you see a lot of equally spaced triangles, one centered at 0, at $\pm f_s$, at $\pm 2f_s$... and so on.

From the spectrum, it is obvious that reconstruction can be done by just removing all the triangles except the one centered at 0. Which can be done with a low pass filter of cut off frequency $f_m$.

If $f_s < 2f_m$, then the triangles overlap and the signal obtained after passing through a low pass filter won't be the original one. This phenomenon is called aliasing.

Hence the theorem: A band limited signal may be reconstructed from its sampled version if the sampling frequency is atleast twice the bandwidth

Not the answer you're looking for? Browse other questions tagged frequency-spectrum sampling or ask your own question.

4
Compensating for measurement errors
7
BandPass Signal Vs PassBand Signal
1
Aliasing beating frequency
1
Phase spectrum range
0
What is the link between equation of a continuous signal versus equation of its sampled form?
3
Should the phase coefficients of the DFT of a real, even input signal all be zero?
1
Explaining a statement regarding aliasing in a document
0
Aliasing at $f_0 + kf_s$
2
Aliasing in Doppler Radar
2
Misunderstanding of Nyquist sampling theorem and minimum sampling rate