How can I remove random dots from an image?

I recently received some scanned pictures which are in a pretty good state, with OK resolution, but they are randomly spattered with a bunch of black dots. These cover everything (clothes, faces, walls, windows, and so on) except for a few very bright areas. I also have no idea how they got there. Here is a sample: 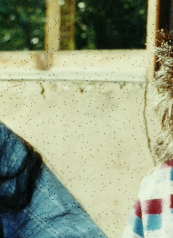 From an information content perspective, I would expect that these dots could probably be removed as they likely have a quite distinct signature. (If they were evenly distributed, for example, I know that a spatial mask on their Fourier transform would do wonders.) Is there some algorithm to remove these artifacts?

OK, thanks to the fantastic Stack Exchange Ask a Question page, I have now a good idea of what they are and how to remove them. This is what I would describe as "pepper noise", as opposed to the traditional salt and peper noise. It can be removed by using a median filter, which essentially replaces each pixel by the median of the values of the pixels in some suitable neighbourhood around it. This is available directly in Photoshop, and as part of the Despeckle filter in the GIMP (see e.g. this resource). I hope this Q&A will be useful for other people with the same problem.

A drawback of median filtering is that it erodes the edges of the image. TV denoising is often preferrable, albeit more complex. Dunno if the GIMP has anything like that.