As I understand aliasing is because you sample a high frequency with a low sample rate, and the sample points don't have enough information about the high frequency component. Here is an example of aliasing: 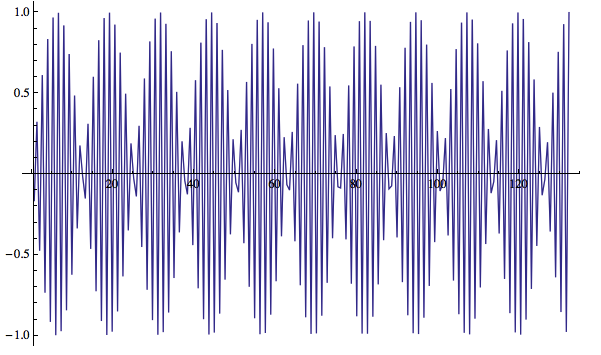 we can see in the plot that there is beating. And the Fourier transform gives only one frequency(except the symmetric negative frequency one). 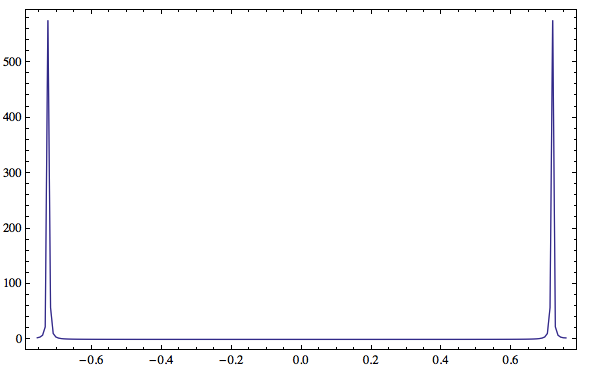 As chirlu points out there is not beating, if it is the beating because of adjacent frequencies, we would expect to see two separated peaks if we increase the Fourier transform resolution. Here I increase the frequency resolution by including more sample points, and we can see it is a single peak, not adjacent peaks. 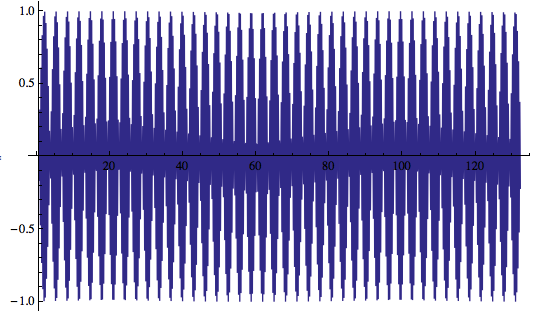 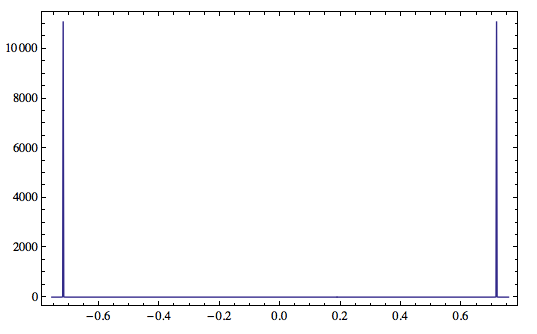 Here is an example using sound:

So use a lower sample rate, we can actually hear the beating! 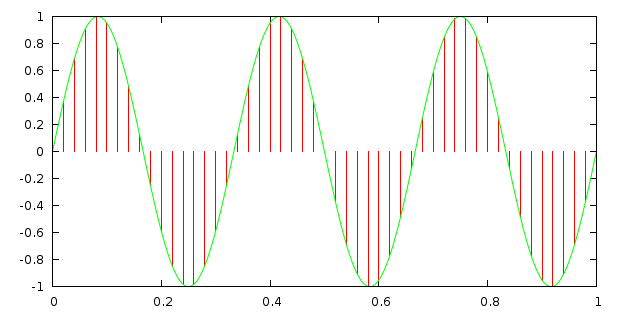 The red impulses indicate the sample values. The green line, on the other hand, is the continuous function that is being sampled. The sample values all lie on this curve, and it goes through three complete cycles, as one would expect.

Because the sample rate is 50, anything above the Nyquist frequency of 25 is going to alias. As an example, here is a plot of $f_{53}$; mind the axes, I zoomed in to one tenth of the above, because otherwise the image would have become quite crowded. 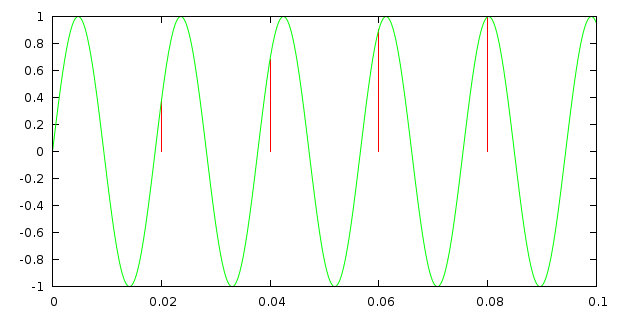 There is slightly less than one sample per cycle, so the sampled values don’t follow the continuous waveform very closely. Actually, if all you saw were the sample values without the green curve, like so … 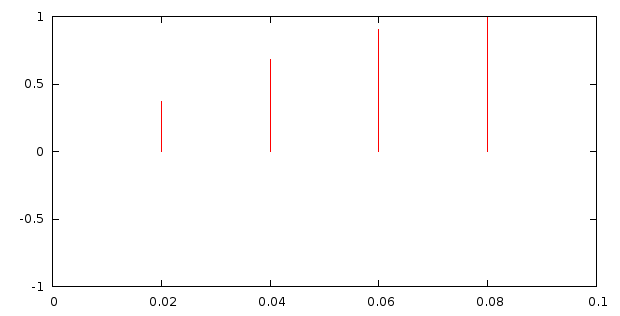 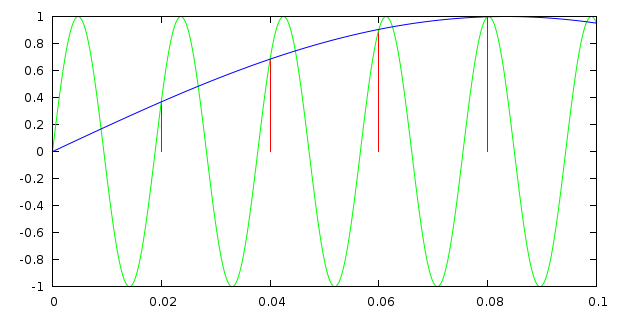 This means, for your question, that the effect you are observing is not due to you using signals that exceed the Nyquist frequency; you can replace any higher-than-Nyquist-frequency signal with its alias in the Nyquist range and will get exactly the same results.

So what causes the apparent “beating”? Here is the very first plot of $f_3$ again, but this time it shows the sample values and linear interpolation between them (i.e. straight line segments from each sample point to the next), not the actual continuous waveform that was sampled: 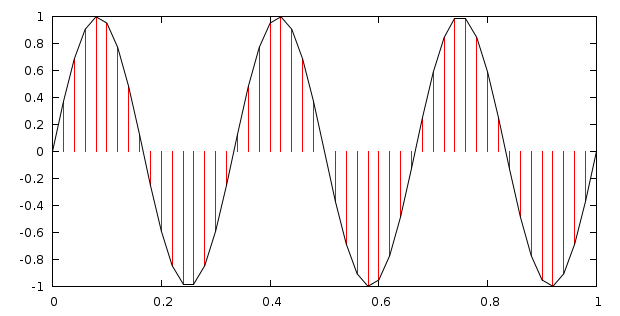 The interpolated waveform is a bit edgy, but overall a good approximation of the original sine wave. Unfortunately, this is only because the frequency is very low relative to the sample rate. Here is $f_7$: 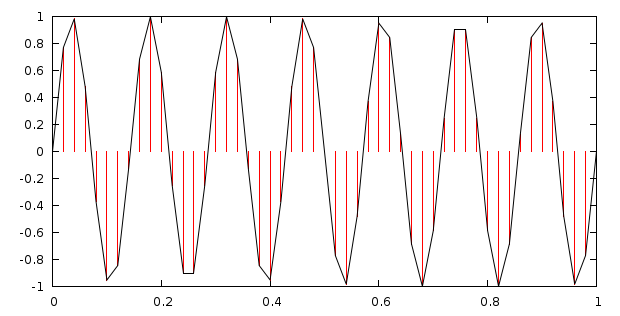 Urgh. It worsens as we get to higher frequencies, closer to the Nyquist frequency; this is $f_{23}$: 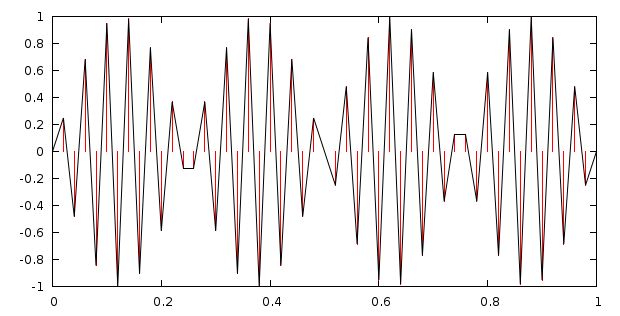 Unfortunately, even if we don’t draw those straight lines, our eye will try to connect the dots all on its own, and the impression is similar: It looks like a slow oscillation modulated onto a fast one. And that impression actually isn’t completely beside the point: 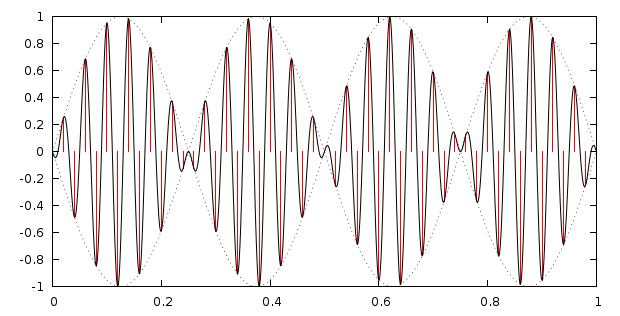 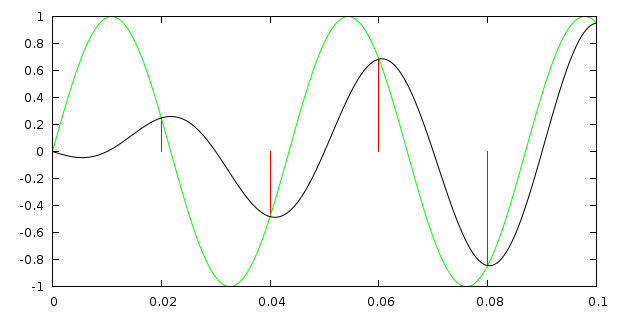 This is, within the baseband from 0 to 25, the only possible interpretation of those sample values.

Watch out for improper interpolation! When reconstructing a continuous signal from samples, the limited bandwidth must be taken into account (band-limited interpolation). Unfortunately, our eyes are not good at this; and many software waveform editors and resamplers aren’t, either.

If there is apparent beating in the time domain, and you zoom into your apparent one peak in the frequency domain, you will find the main lobe or skirt around that peak is slightly fatter than if there is no beating. This is because there is really a second peak (and potentially more peaks) hidden inside and/or under that wider main lobe or it's skirts. It's not always one pure sinusoid frequency causing a peak in a zoomed-out FFT result. And two adjacent frequency sinusoids can cause an amplitude modulation in the envelope of the linear sum (beating).

Sudarsun is correct. You aren't seeing the additional frequencies because your sample rate is only 1.5Hz. You are limited due to the periodicity of the fourrier transform to a band of .0.75Hz to 0.75Hz. If you do it on paper you will see that sure enough by repeating the spectrum of the 5Hz sinewave by n*1.5Hz in both the + and - direction you will see exactly what you show in your graphics for a frequency span of -0.75Hz to 0.75Hz. You were mistaken to increase the resolution of the FFT, no need for that that. what you needed to do was increase the sampling rate without changing your original signal. To do that just pack 7 zeros between sample points. This will give you a sampling rate of 1.5*8 = 12Hz. I'll bet you see all the frequencies you think you should see...

www.complextoreal.com You can see my book "Intuitive Guide to Fourier Analysis ...."

Not the answer you're looking for? Browse other questions tagged sampling aliasing or ask your own question.

2
Where can I find an authoritative (peer-reviewed or textbook) reference to sampling-induced beating?

2
How to predict the spectrum of an aliased/folded signal without looking at the FFT?
1
Designing the filtering for a time domain data acquisition application
2
Does a 20 kHz sine wave sampled at 44.1 kHz need to be reconstituted before playback?
0
low frequency transform
0
Aliasing correspondance with respect to DFT
0
does aliasing occur always if i sample a vibration in real world applications?
0
Aliasing at $f_0 + kf_s$
0
Multiple choice on sampling and aliasing
0
Sampling with an alternating phase offset
1
How do I detune an audio sample by 1 hertz up or down from a copy of it