Why do envelope extraction before pitch detection?

I am referring to this report on pitch estimation.

What is the advantage of doing that?

Is speech a narrowband or wideband signal? I read somewhere that hilbert envelope extraction works better for narrowband signals.

When I extracted envelope of a speech signal using Hilbert transform, in some places the envelope was almost the same as the original waveform(Figure 1), whereas in other places it tracked the upper portions of waveforms (Figure 2). 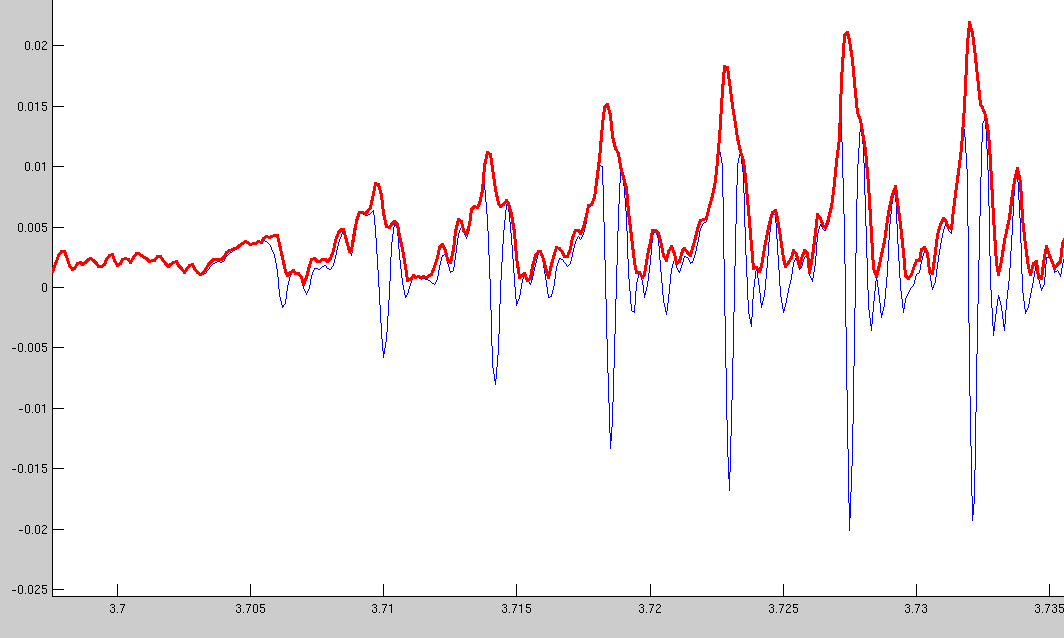 My guess is that the Hilbert Transform is a pre-processing step which attempts to make the actual pitch detection stage (AMDF, in this case) more robust.

The basic reasoning is this: pitch detection of speech is made more difficult by the time-varying spectral characteristics of the signal. On the other hand, pitch detection of an impulse train is easy: just count the number of samples between each pulse (or look for the first peak of the auto-correlation function/the first dip of the AMDF etc). Pre-processing the speech signal to make it more pulse-like therefore improves the results.

In your diagrams, the Hilbert transform does make the speech pulses more impulsive, though I think that other pre-processing steps (e.g. inverse-filtering by the estimated spectral envelope) is likely to yield better results.

In a generic 1st order resonant system, energy is usually continually being exchanged between 2 quantities, such as displacement vs. momentum (etc.), with the combined energy changing at a much slower rate. The Hilbert transformer, after the bandpass, is trying to estimate one quantity (not being measured) from the other (say local air pressure, or displacement of a resonator surface) that is actually measured. If the energy of the sum of the two varying quantities stays about the same over time, then there might be energy at that frequency worth being measured. Otherwise it might be just a measurement transient having not much to do with some resonant happening at that frequency.

Vocalizations usually involve several different vocal tract resonances. It's usually easier to try to detect and/or measure each potential resonance separately when trying to characterize what's going on with a mix of multiple simultaneous energy exchange systems, than to try and solve for the entire mix all at once.

Not the answer you're looking for? Browse other questions tagged speech pitch hilbert-transform preprocessing or ask your own question.