There seems to be two concepts used here:

1) When an image is halved, applying a gaussian kernel of σ will apply as 2σ.

2) When an image has a scale of σ, and a gaussian kernel of σ is applied, then the resulting image will have a scale of sqrt(2)*σ.

So when I'm constructing the above scale space, I do the following: 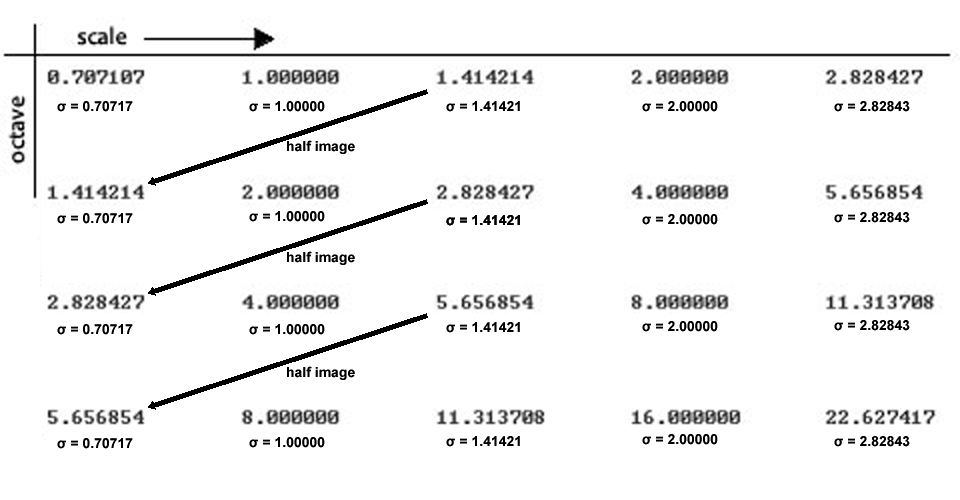 Where the sigmas shown are the sigma of the gaussian kernel applied to the image at the specified scale.

I implemented this in matlab with:

Is this the correct line of thinking? I've implemented this and when I look at the laplacian of guassian pyramid, it seems to skip over some scales.

EDIT: After some tests it appears I'm not able to implement #2) listed above, where two guassian convolutions with σ is the same as a single guassian convolution with sqrt(2)*σ. When I test it out and then substract the images, they are not the same...

EDIT2: Also made a small mistake on calculating the sigmas. The above idea should be correct now. I double checked by comparing the scale obtained at σ = 22.627 by convolving the original image with a gaussian kernel of σ = 22.627 and then down sampling and comparing the two images and they appear to be the same.

Browse other questions tagged image-processing matlab sift multi-scale-analysis or ask your own question.

5
Function for response over image scales
7
Standard Deviation in Gaussian Blur
10
Understanding SURF Features Calculation Process
0
Is there two Types of Scale Space in SURF algorithm?
1
Critically Sampled Laplacian Pyramid from 2nd Generation Wavelet
2
Pyramid vs Scale-space in Focus Stacking
1
Why is scale space (DoG) needed to detect scale invariant features?
1
Why do we need multiple layers in each octave and multiple octaves in SIFT?
1
Why do we need to construct Gaussian pyramid using SIFT detector