For the moment I can sucessfully decode it using hard decision but in order to improve performance I'd like to use soft decision. I've read some online courses about the Viterbi decoder and I think I understand how it works.

The thing is that I'm not sure of how to go from a QPSK symbol to a soft-bit pair. I've tried looking around to find some information about this precise step but couldn't find anything of interest. Thus I'd like to know if what I'm doing is right or wrong.

I should also mention that I use the constellation [1 i -1 -i] and Gray encoding so the hard decision patern is the following: 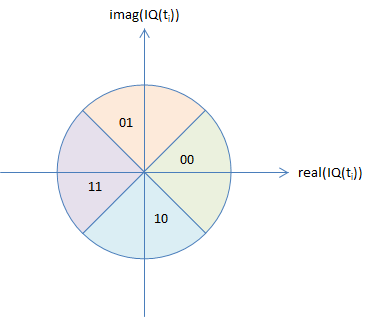 My guess is that the two soft bits should be:

Any confirmation or contradiction would be really appreciated as it could help me to move on. Also if you have any good source on the subject I'll take them too!

Unfortunately you did not mention what your channel is so I assume that merely AWGN is present. Furthermore I assume symbol-by-symbol detection is desired since a decoder for the Hammingcode is following later. So a single symbol $x$ is received as $y = x + n$ where $x \in [1,j,-j,-1]$ and $n$ is distributed according to a zero-mean complex normal distribution, i.e. $n \to CN(0, \sigma_n^2)$ so that:

We know the conditional density $p(y|x)$ of the received symbol $y$ if the transmitted symbol $x$ is known. It is a non zero-mean complex normal distribution, i.e. $(y|x) \to CN(x, \sigma_n^2)$ and:

However, we know $y$ and want to know the likelihood of $x$, so we utilize the bayes theorem:

$p(y|x)$ is already given above, $p(x)$ is the prior density of your transmit symbols. Often the systems are designed so that all symbols have equal probability so that $p(x) = \frac{1}{N_s}$ with $N_s$ being the amount of symbols in your alphabet. It is 0.25 in your case. Ignore $p(y)$ for the moment, it will cancel out later.

Now a softbit is usually defined in terms of it's log-likelihood, so that

The logarithm is mainly used since the calculations become more numerically stable since very often the probabilities will be either very close to zero or very close to one and quickly reach the precision limits of floating point processors, especially when multiplying many of those probabilities together. So now how can we express $p(b_0=0|y)$ in terms of $p(x_k|y)$? Assume the following bit mapping (use your own here):

Using the bayes theorem under the assumption that the prior $p(x)$ is equal for all symbols, we finally get:

which can be calculated using the definition of $p(y|x)$ given above. Similarly the softbit for $l_1$ can be calculated. The softbit will be positive if the bit is more likely to be zero and negative if it is more likely to be one. So you can get a hard decision just by looking at its sign. The magnitude of the log-likelihood corresponds to how much is known about the bit. If it is large, the bit is likely to be a zero or one. If it is close to zero, there is a higher chance the bit is wrong. If it is exactly zero, nothing is known about the bits value.

Lots of optimizations can be utilized to make this code run very fast but this would be a little much for an answer here.

Not the answer you're looking for? Browse other questions tagged discrete-signals algorithms qpsk forward-error-correction viterbi-algorithm or ask your own question.