We changed our privacy policy. Read more.
This site is currently in read-only mode; we'll return with full functionality soon. Follow @StackStatus or visit our status blog for more info.

what is proper setting for Fb,Fc in Complex morlet wavelet (cmor)?

I am using Cmor-Fb-FC wavelet transform in matlab environment. Fb is bandwidth and Fc is center frequency parameters. with trail and error procedure I select Fb-Fc as 5-1, and I've got rational output. But I want to know whats the rule of selecting proper value for Fb-Fc parameters? Imagine I am using 300 samples over 30 sec. so my sampling frequency is 10 Hz.Here is my signal.

Remember that Wavelet Transforms are nothing but time-localized filtering/correlation operations. The wavelet transforms provide a unified framework for getting around the Heisenberg Uncertainly Principle that the Fourier Transform suffers from. So when you ask "what should my settings be for bandwidth, and center frequency", you are asking for filter parameters to be given to you. No one can give you filter parameters but yourself, and your application. This is why they are parameters. :-)

More concretely, how to pick your $F_c$ and $F_b$ have to do with the nature of your signal. First, some pre-liminaries:

Wavelet Transforms are nothing but matched filters that you construct, such that you have the best match to the 'features' in your signal of interest. One set of 'features' that you might consider would be the neighbourhood of center frequency, and the neighbourhood of bandwidth. Again, no one can pick those for you, because you need to know what you are looking for. However, you can pick a range commensurate with what you expect. (This is actually one of features that make Wavelet Transforms very powerful).

The morlet wavelet is given by the following function:

Here, $t$ is the time index in seconds, $f_c$ is your center frequency, and $T_p$ represents what I have called a "Period Parameter". Inspect the above equation. Notice how the morlet wavelet is in fact nothing but a complex exponential centered at frequency $f_c$, windowed by a zero-mean gaussian function, with $\sigma = \sqrt{\frac{T_p}{2}}$

Thus, to answer your first question, the $F_c$ parameter, must be chosen such that it is at or near the frequency you wish to interrogate.

Regarding the wavelet bandwidth: What I have called $T_p$ here is your "Period Parameter", and this is directly related to your bandwidth. Go back to the Morlet Wavelet equation, and consider a scenario where instead of a gaussian window, we used a rectangular window. In the Fourier Domain, we attain a sinc function due to this type of window, and we can say that the Null-To-Null Bandwidth, $B$, is simply: $B = \frac{2}{T_{period}}$, (in the passband).

The figure below illustrates this for a complex exponential located at $f_c = 2$ Hz, with varying $T_{period}$ values: 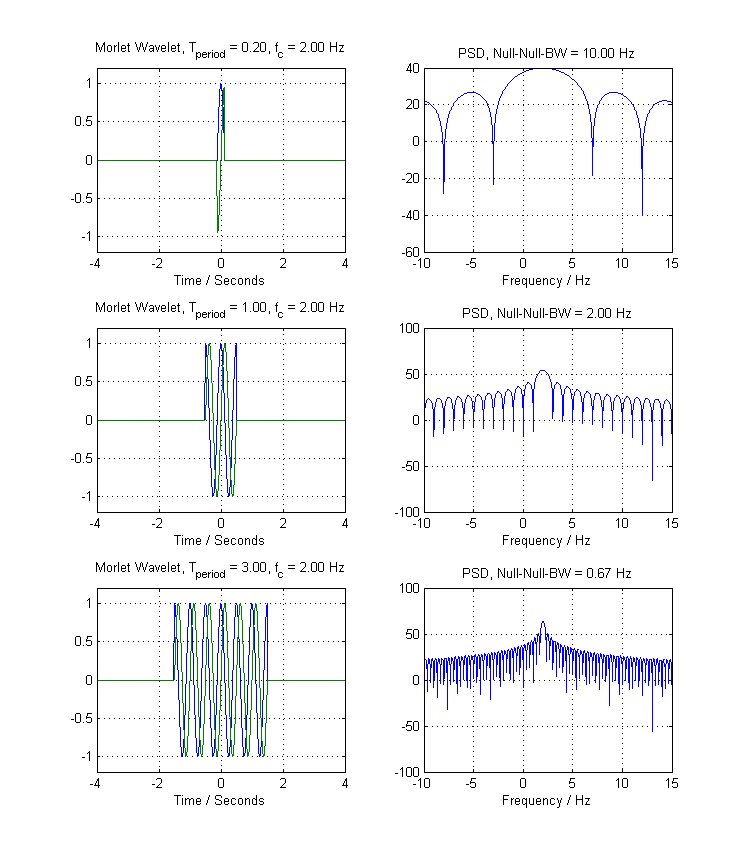 You can clearly see that as the period extent is increased, the bandwidth decreases. This is the inverse nature of the time-frequency relationship. If you wanted to use this pseudo-wavelet, what would you pick the $T_{period}$ to be? The answer would be "Whatever $T_{period}$ my signal-of-interest hangs around at". In fact, this is exactly what is done in the Short-Time-Fourier-Transform, (STFT), although one would pick a smarter window instead of the boxcar.

Now let us re-inspect the Morlet Wavelet Equation, and re-insert the gaussian windowing function, with $\sigma = \sqrt{\frac{T_p}{2}}$. If we do this, we get the following time-domain plots, and the corresponding Discrete Fourier Transform (DFT)s of the Morlet Wavelets: 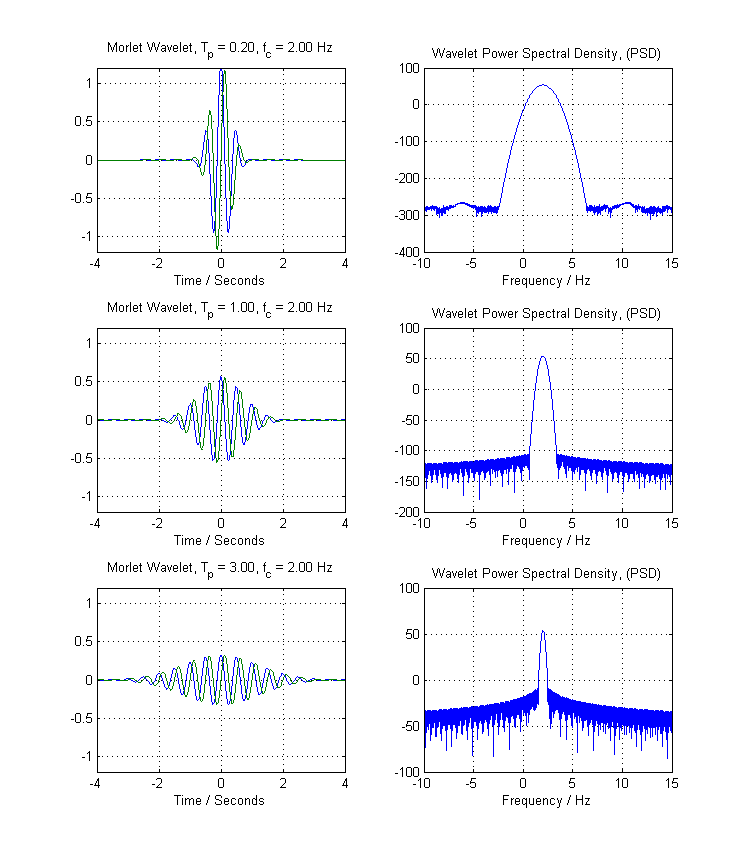 Once again, notice how as the extent - as the variance of the gaussian window shading the complex exponential increases, the bandwidth in the Fourier Domain decreases. (In this case, we have much nicer side-lobe behavior, but this is tangential). In any case, You can once again see how we have an inverse relationship between the $T_p$ parameter, (or the standard deviation parameter of your gaussian, whichever suits you), and the bandwidth of the corresponding filter.

What to do with this knowledge: Now you understand how bandwidth is related to the gaussian shading function embedded within the Morlet Wavelet. Thus, for any signal $x[n]$ you have, you may simply take the DFT of your signal, and observe its bandwidths at various center frequencies. Then, adjust the $\sigma$ and $f_c$ parameters of your Morlet Wavelet accordingly, such that the DFT function of the Morlet filter directly overlaps the DFT function of your template signal. This is how you can set your parameters.

The code to generate the above plots is here:

This site is temporarily in read only mode and not accepting new answers.

Not the answer you're looking for? Browse other questions tagged matlab wavelet bandwidth .