What does the stability margin have to do with the quality of a filter?

I designed a 2nd type Chebyshev bandpass filter with passband between 1 and 6 Hz and 30 dB attenuation in the stopband. When I looked at its Bode plot in Mathematica, I noticed "stability margins" (black lines) on the plot. I'm not familiar with this concept.

Does the stability margin have any impact on the stability of the IIR filter? For instance, will using the following filter on data (that is sampled at the appropriate sampling rate) cause stability issues? 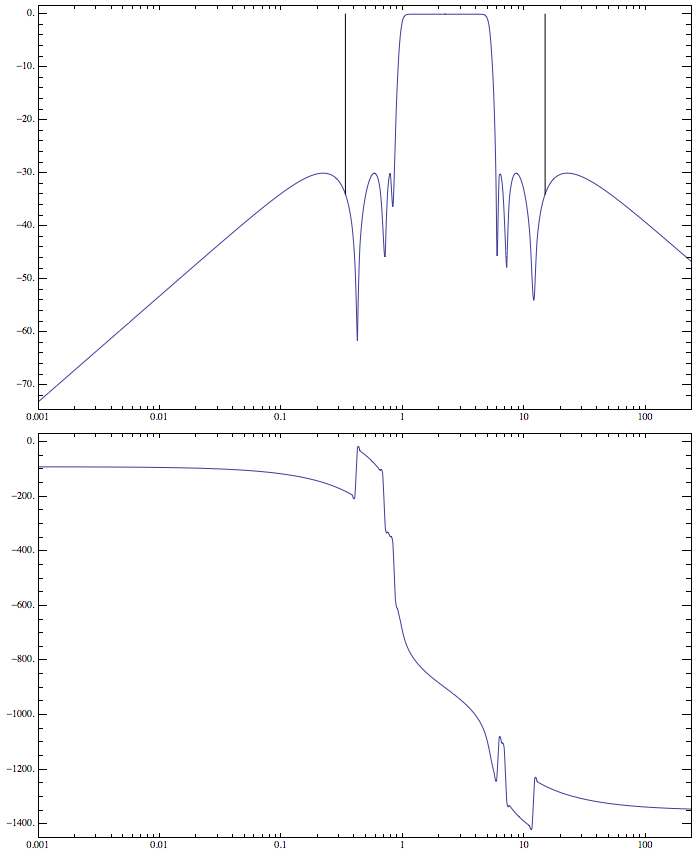 The x-axis in both plots is the frequency (Hz) and the top plot is the magnitude response (dB) and the bottom is the unwrapped phase (radians).

Even though you might have designed your filter to be stable, Stability Margin is a concept which is used to estimate how far we are away from becoming Marginally stable/unstable both in terms of Gain and Phase.

Practical consequences of system implementation always require you to have some Margin because you're never guaranteed that the Gain and the Phase plots are exactly replicated when the system is actually working. So these parameters will tell you if you're safe or not. Theoretically, even being away from 1 degree away from -180 Degree line at Unity gain is stable; but practically there are things that can happen which will push it away easily.

You can learn a lot about these at

Stability Margin doesn't have any impact on the Stability of the Filter, it'll just indicate if your filter is Stable or not.

The Phase plot is actually shown in Degrees. Your filter looks like it is Marginally stable because at a few multiples of -180 degrees, the Gain is 0dB(oscillatory), and that too within the frequencies you've designed the filter to operate, it looks not promising at all. The Black Lines on the gain plot should appear at every multiples of -180 degrees. Also coming to the phase plot, there are no Black lines in this case because at least one Unity Gain crossover point has a Phase rotation that is an Integral odd multiple of -180 Degrees.

7
Abs(poles) < 1 by what margin for a stable filter?
5
What does the uncertainty principle say about recursive filters?
2
Stability varying with order
17
Filter design by distributing poles and zeros on parametric curves
0
Convolution with an impulse response does not give the same result as the frequency response
1
Does this equation have a closed form
1
Stability condition for an iir filter
1
what does the order of filter mean?
1
How can we measure the quality of the FIR filter?